So much thanks to Rebecca Byerly for taking the time to write this article, especially in the context of highlighting women doing amazing things. I’m so grateful and and honored to contribute to her work. I’ve spent a lot of time as a female feeling disadvantaged (because I often was) and that the world was unfair (because it often is). I still feel like there’s a little part of me working hard to prove it wrong. Even if I’ve already done it time and time again. I am learning that I am the one who decides my limits and I fully support ALL the women in this universe in their own journey to believe that they have the right for this to be their truth, as well.
Ashley Carr,  August 27, 2020

Ashley's Story, in ​Women of the Mountain 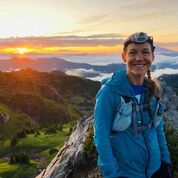 Nearly a decade ago when Ashley Carr was 24-years-old, she went into treatment for substance abuse. She had never run before and did not consider herself athletic. But when she got sober, she needed to find another way to spend her time. Ashley ran a 5k and was so overwhelmed by the feeling of accomplishment that she decided to run a marathon.

​This summer, when all her races were cancelled due to COVID-19, Ashley decided she’d attempt an unsupported Fastest Known Time on the northbound route of the Appalachian Trail through Shenandoah Park in Virginia. This would require her to run 107 miles, carrying everything she would need, and get her water refills from springs during the hottest part of the summer.

Ashley, who describes herself as a Type A personality, enjoyed the meticulous planning a Herculean athletic endeavor like this requires. She felt prepared. However, when the sun went down the heat of the day caught up with her. She lost her appetite and could not drink water or eat. For a solid seven hours, Ashley says she was sure she was going to quit.

“I have never in my life thought about quitting like I did in this race,” says Ashley, 34, who completed the Bigfoot 200 Endurance Run, even after getting a stress fracture halfway through the race. “It was such a dark moment. I had 45 more miles to go and truly felt that I could not do this. I was slogging down the trail feeling all the guilt and shame that went with knowing I’m going to quit.”

But Ashley says her crew, who could cheer her on as long as they did not provide any kind of assistance, would not co-sign her BS. She said they simply refused to feed in to her negativity. Throughout the night they encouraged her to take tiny bites of food and sip water and assured her that by the time the sun came up she’d feel better. One of her crew members told her that when she hit Thornton’ Gap she’d only have 30 miles to go. Ashley’s says that’s when it really clicked for her. Thirty miles felt manageable, and the crew member said WHEN not IF.

“I spent the first 25 years of my life searching for meaning and purpose in all the wrong ways and came really close, many times, to losing myself,” says Ashley, who completed 109.4 miles in 39 hours and 45 minutes snagging the FKT. “I have come away from that experience with this overwhelming desire to expand and to get the most out of everything. I crave the moments when life is really intense in good and bad ways. I think it comes from the suffering of almost throwing it all away.”

Ashley, who works as an art therapist in an addiction treatment center and in inner city Baltimore, says that struggle of an intense run mirrors the process of healing.

“You have to dig deep and put in the really hard work to get to the place you want to be.”